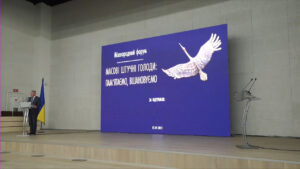 The Program of the International Forum was divided into three sections: 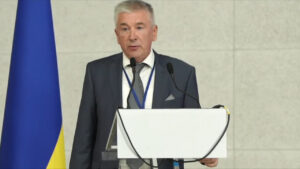 Valery Shepitko, President of the International Criminalists Congress, stated: “… Artificial famine was becoming a weapon of mass biological annihilation of people. In the process of establishing the total number of Ukrainians exterminated by the communist totalitarian regime, during the commission of a particularly serious crime – genocide, in 1932-1933 against Ukrainians, the experts examined the materials of criminal proceedings, studied the archived criminal case, conducted dozens of complex forensic examinations, examined a significant number of documents (historical, archival, statistical, etc.). When carrying out comprehensive forensic examinations, special criminalistics and scientific methods were used; this made it possible to fully and objectively reveal the circumstances and consequences of the crime of genocide. In addition, the experts also used various methods and techniques (mathematical, historical, statistical, methods of historical demography some and others) during the expertise. … The use of specialized and forensic knowledge makes it possible to establish facts that occurred many years ago, to collect evidence of the commitment of the crime – genocide. The usage of modern scientific data and expert studies (there can be various expert studies and forensic, and forensic-genomic, historical-criminalistic, forensic-archaeological, forensic-documentological, and forensic-economic) allows us to establish the facts on the number of people who died, the deaths of certain population groups, the cause of deaths, the property damage, the decline in childbearing, and the spread of the famine on the territory of Ukraine. The Commission of Experts draws the attention of scientists, researchers, historians, lawyers, demographers who research the Holodomor-genocide of 1932-1933, committed by the communist totalitarian regime against Ukrainians, to the fact that comprehensive forensic examinations are a specific scientific basis for the continued work to find and investigate new documents, identify witnesses, establish the illegal actions and consequences that the Ukrainian nation has suffered According to the results of comprehensive forensic examinations it was established that in 1932-1933, in order to eliminate the national liberation movement, the destruction of the Ukrainian nation as such and to prevent the restoration of the Ukrainian State, the communist totalitarian regime committed a particularly serious crime – genocide of Ukrainians and destroyed ten million five hundred thousand Ukrainians, including four million children”.

Information is provided by